I am so rarely rendered speechless that it takes something truly wonderful or truly horrendous for it to happen.

Unfortunately, something truly horrendous happened last Monday, March 27. It's so terrible that I don't even know how or if I should write about it publicly. I think that this is important enough to tell the greater world about, though, so I will try. I sincerely hope that writing about this in this forum does not increase the sadness or suffering for anyone in my family.

My cousin David, who had just celebrated his bar mitzvah, was found dead in his bedroom, apparently from self-strangulation, on Monday night, March 27. By far, the most likely cause of his death was the "choking game," wherein kids, often between the ages of 9 and 14, cut off circulation to their brains, not only with their hands (or their friends' hands) but with belts, ropes, or sheets, and when they let go and restore circulation, they get a mild high. I had never heard of this "game" before last Wednesday, when I flew out to attend David's funeral and be with my aunt, uncle, and David's younger sister, Sarah.

His death was initially thought to be a suicide, but that seems unlikely for several reasons. David was thirteen years old, so he naturally was unhappy some of the time. He was unhappy to have moved, a year and a half ago, from a large coastal city to a small midwestern one. He didn't love the school that he attended. (He was in 7th grade at a nearby public school.) He was unhappy to have to wear a suit and tie at his bar mitzvah (which I attended two days before his death). He didn't really want to do the whole bar mitzvah thing (although he did a fantastic job), although he was looking forward to all of the presents. He was unhappy that his parents wouldn't let him turn the amp for his electric guitar up to top volume. On Sunday night after the bar mitzvah, when I had dinner with him, he was unhappy that it took dinner so long to heat up (along the lines of "C'mon, Mom! Why does it take so long to get hot? I'm hungry!"). He was unhappy about normal 13-year-old boy things.

He was a joker and he loved to make people laugh. He had a funny sense of humor. He played football, basketball, and baseball, and for about a year had been playing the electric guitar. He had made a lot of good friends at Camp Moshava the previous summer, and was planning on visiting a bunch of them the weekend after his bar mitzvah. On Monday, the day he died, my aunt told me that he had called or IM-ed many of them to say how excited he was to be seeing them the coming weekend. He was excited about coming to New York in June to spend a few days with my brother and me, bumming around the city. None of these things point to a kid who was about to commit suicide.

As far as the "choking game" goes, that seems far more in character. David was a limit pusher. One day, his parents hoped, he would push limits and do great things with his life. They predicted that he would change the world (but need a woman to dress him!), and I'm sure he would have. Of that, there is no doubt in my mind. In the meantime, he loved rock music (with cursing and violence if possible), wearing black AC/DC t-shirts and sweatshirts, playing his guitar loudly, wearing his blond hair as long as he could get away with (the "floppy look," one might call it), and even setting firecrackers off from his bedroom window. He was a thirteen-year-old boy, with the judgment endowed to thirteen-year-old boys, and that's what killed him in the end.

I want to take this opportunity to make sure you all know everything there is to know about the "choking game."

You must make sure that every parent knows about it and every teacher. Hell, make sure everyone knows about it and that everyone includes admonitions against its practice along with the litany of drugs, alcohol, smoking, and unprotected sex. With so much emphasis on drugs, it almost makes sense that the "choking game" would seem like a "safe" way to get high to thirteen-year-olds. It's apparently a particularly common practice among 9-14 year olds, who probably have a harder time accessing drugs and alcohol. Make sure that people know that this can kill you, whether you do this alone or in a group. (There are, unfortunately, many more links to young kids who have died this way. I just included the first four that I found. And it is easier to die doing this alone, but you can also die doing this in a group.)

. . . . .
This tragedy would be too terrible for words in any circumstances, but the juxtaposition between his bar mitzvah and his funeral--a mere four days apart--make this inconceivably tragic. Bar mitzvahs are about life, beginnings, and potential for future greatness as an adult. Bar mitzvahs are about welcoming young people into the community. Funerals are death, endings, the loss of possibility for the future, and about saying goodbye to the people we love.

I went to David's bar mitzvah and it ranked among the best family gatherings in my memory. It was on the level of my grandparents' 50th wedding anniversary parties in 1994 (paternal) and 2000 (maternal), both of which also served as joyous reunions and celebrations of family lore. David, having refused to give a canned dvar Torah about the parsha, gave a speech that he had written himself, which included the lines, "I could probably think of a million things that I would rather be doing," "Would you believe that my mother wouldn't let me wear a t-shirt and baggy jeans? And I checked every store and could not find one suit that had AC/DC written on it," and "Do I look like a public speaker? I get stage fright singing in the shower, let alone speaking in front of a big crowd like this." The quote that summed up David's resolve and his underlying character was, "What made me come out and do this today? Because I learned that sometimes there are things in life that you don't want to do and you just have to do them." Where did David learn this very grown-up lesson? On the football field. He proceeded to tell us how football taught him this, and then he connected it to the double Torah portion of the week. I couldn't give a speech anywhere near this good today, never mind when I was thirteen.

On the Sunday morning following the bar mitzvah Shabbat, a new sefer Torah (Torah scroll) was dedicated in memory of my grandfather, who passed away a little over two years ago, and in honor of David's bar mitzvah. It had a bright red cover because that was my grandfather's favorite color. The ceremony (hachnasat sefer Torah), which started off with much joyous dancing in the bracing morning air, was beautiful and moving. The rabbi spoke incredibly well about what endows a sefer Torah with holiness. (It turns out that it's not the parchment, the ink, the staves, or the beautiful cover. It's the person who writes it and the person who uses it and lives a moral life according to its principles. It's not about the book, people! It's about the person. David was a kid, and my grandfather was a man, who most definitely appreciated that it was "not about the book.")

To go from that to a funeral and then a shiva house was nearly unbearable. The large poster of David that his friends and family left little notes on ("You're the man!" "Great job!" "Mazal tov!" "We're all so proud of you!") was still in the family room. We used black napkins that had "David" written on them in silver ink. (David was a big Raider's fan, so the theme for Sunday's brunch was black and silver.) All of the bar mitzvah leftovers that my aunt had efficiently frozen on Sunday night came out and were defrosted for friends and family. People were drinking bottles of spring water that had labels reading "David's Bar Mitzvah" on them, with the date of the event, March 25. And on Thursday, March 30, the shiva minyan used the sefer Torah that was dedicated the previous Sunday morning. It was its inaugural use, and it was still rolled to the very end, where the scribe had finished writing it amidst laughter and joy.

. . . . .
And with that, I'm all out of words. What else is there to say on the day that David's family got up from shiva for their son and brother?

In the words of Sarah, David's younger sister: "I'll sure miss David."

We will all miss you and we all want nothing more than to turn back the hands of time and undo this tragedy. Given that we can't, we want everyone to know what happened to you and try to make sure that it never happens again. One boy dead is one too many. 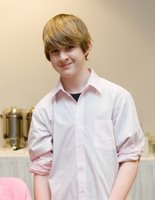 Comments:
I'm so sorry for your loss. I hope no one else has to experience a death in this manner.

People in their teens and early twenties are risk takers. Even I, who didn't take risks as a teenager, at age 20 did something risky when I went to Lebanon and Syria in 1972. Later, as a parent of teenagers, I always felt lucky that my kids were generally careful and didn't take unnecessary risks (at least that I know of). The key work here is "lucky," because, as much as you tell your children to be careful, depending on their personality and other factors, they may or may not heed your words. Parents need guidance in dealing with teenage risk-taking, so as to lessen the chance of it being fatal.

I'm passing this along as soon as I have the chance

ag - i am so sorry to hear about your cousin. it sounds really painful, especially for it to happen just after so much joy in your lives. my thoughts and prayers are with you and your family. i hope that pesach can be a time of healing, reflecting and connection for you and your family.

I am so sorry for your loss. And so sorry that I didn't read this until now, when your sidebar told me to.

He must have been quite a kid--your eulogy is very touching. May his memory inspire you and the others who loved him.

I too, am so very sorry for the loss of this boy..
On May 6, 2005 the 'choking game' took the life of one of my 13 year old twin sons, Gabriel. This wicked, high risk, thrill seeking activity has been killing for DECADES! Education and warning are crucial.. tell kids before another kid tells them 'what a good time it is' or 'don't worry, it's safe, it's not like drugs', it's not illegal'...kids teach kids.
Thank you for speaking out, and being a voice for David...
Love to you and yours,
Sarah Pacatte, Gabriel Mordecai's Mom
StillLovingMyGabriel.com
DeadlyGamesChildrenPlay.com

What I Want to Read

Highlights of Brazil (more than $10 but less smelly than NYC)

If You Want to go to Brazil...